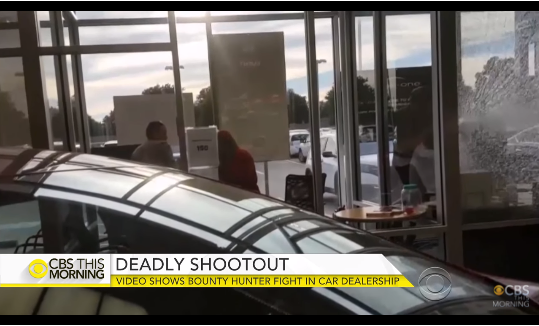 The events that unfolded in a Dallas area car dealership on May 30th left three people dead and a slew of questions regarding the responsibility of Texas Private Investigators and the Bounty Hunters that they employ.

Ramon Hutchinson was wanted in Minnesota for missing a court hearing on drug charges in March. On that fateful day, a Private Investigator, Fidel Garcia and a Bounty Hunter, Gabriel Bernal arrived at the dealership to wait for Hutchinson to appear. Security camera footage shows that when Hutchinson arrived, Garcia and Bernal approached him, drew their weapons and attempted to capture him. As the video shows, this situation escalated with all three men exchanging gunfire, as Hutchinson attempted to reach out for his pistol that was on the desk.

The actions on that day bring into question the following; Why did the Texas Private Investigator decide to use the car dealership as the place to apprehend Hutchinson? Did Garcia or Bernal break the law regarding Private Investigating and Bounty Hunter use of deadly force?

The short answer is, “No.” According to BountyHunterEdu.org, “In Texas, bounty hunters, otherwise known as fugitive recovery agents, are not issued a special license or certificate. However, if you do not meet the state’s legal requirements for serving as a bounty hunter, you will be arrested for committing a state felony. Texas bounty hunters are not law enforcement officers, but rather, employees of security guard companies or private investigation companies. Presenting yourself as a law enforcement officer when performing the duties of a bounty hunter in Texas is also against the law.” In the case involving Hutchinson, the car dealership personnel stated that Garcia and Bernal had presented themselves as federal agents.

Gabriel Bernal was an employee of Garcia’s company, F.N.G. Security and Investigations, but as he was a licensed Bounty Hunter and not a Licensed Texas Private Investigator. Accordingly, he could not legally apprehend Hutchinson. This is why Fidel Garcia was present at the time of the shooting.

In the state of Texas, there are several regulations for Bounty Hunters that are recovering fugitives.

The shooting also highlights the issue of Deadly Force. While both Garcia and Bernal had licenses to carry a firearm, should they have branded their weapons in such an open place with many potential innocent witnesses?

Situations where displaying a firearm by a licensed Texan Private Investigator can be the following:

In this situation, Bernal and Garcia had Hutchinson cornered and it was when Hutchinson reached for his gun that the confrontation turned deadly. This highlights the need for training or understanding how to defuse a tense and possibly deadly scenario.

Some Tips on Defusing a Situation from Dr. Michael Smith

By introducing another focus point, the suspect could be disarmed or reasoned with.

Of course, it’s impossible to know if the deaths of the three men could have been avoided. Regardless, this video highlights the critical need for de-escalation training and understanding of the laws when Private Investigators employ the services of a Bounty Hunter.