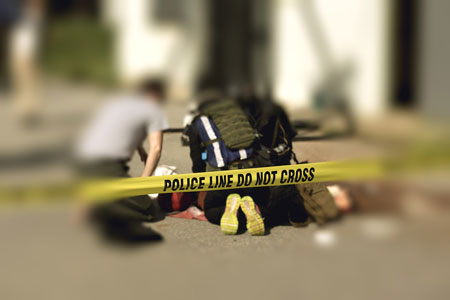 On April 20, 1999 two students entered their high school in Littleton, Colorado and carried out the most infamous school shooting in U.S history, forever changing safety in a school environment. Since that tragic day over 270 school shootings of any kind on school grounds have occurred around the country. In each incident many people struggled to find reasons that led the individuals to make such a horrific decision. Bullying, violent media content, easy access to guns, mental instability or a combination of these and others have been brought up in discussion over the years.

Regardless of the reasons one thing is certain, schools need to be prepared as an active shooter scenario at a school has a high risk of occurring each school year. An FBI study in 2014 found most active shooter scenes are over before police arrive. Due to this schools are relying more on campus Security Guards for faster response and even possibly neutralize the threat. Campus Security is often working with students by educating and practicing how to respond in an active shooter situation.

In this article, we will focus on the Security Guard duties on campus and how to take the right approach for an active shooter crisis.

Shootings have occurred in elementary, high schools, as well as on college campuses in the United States. Schools in general present a security issue as there is usually more than one building on a large campus with lots of bodies to protect every day. Colleges especially have even bigger campuses and more complex buildings making it difficult to ensure complete safety in all areas.

As an example in the Virginia Tech shooting on April 16, 2007, a Virginia Tech student shot two people in a four story dormitory at 7:15am. He then shot and killed over 33 students and faculty including himself at 9:45am in another building. Virginia Tech Security was questioned heavily after on why the shooter was able to cross over to another building and kill more people over two hours after the first shooting was reported.

The majority of active shooters don’t stand out as violent people with a long criminal history, but most of the time someone knows they’re planning it.

The U.S Secret Service, U.S Department of Education estimated 73 percent of the shooters involved had no prior criminal record and in 81 percent of the shootings someone had prior knowledge the attacker was planning or at least thinking about a shooting. This is both discouraging and hopeful for campus Security Guards as it there are no obvious signs who the next shooter will be but they can prepare daily by interacting with students and listening to conversations as they patrol picking up any signs of future trouble.

A shooter will usually plan their attack carefully and in many of the cases they have committed suicide or died during the shooting.  A Security Guard must be very aware of their own surroundings as well as others as they will present as an obstacle for the attacker and might be included in the plan. A Security Guard cannot act as a line of defense if they become the victim so it’s important to recognize danger before it’s too late.

Security Guards should know the location they are protecting inside and out. As a Security Guard you can take time to learn every route on campus, every building and every classroom within. Carry or create a map to keep on you at all times so you can be able to respond quickly when notified of an active shooter in the area or assist police in where to go. Update your map frequently for any classroom or structural changes. Also keep an eye out for any vulnerabilities such as broken locks on doors and entrances and exits to the campus. Knowing the school can also be an opportunity to interact with new students directing them where to go if they are lost which can help to begin to establish trust.

During an active shooter scenario the roles of Security Guards differ greatly based on if the Security Guard is armed or unarmed and their personal level of training and experience. First and most important for both types is communications. Each school needs to have a plan in place when an active shooter is on campus. This plan should include notification to campus Security Guards who can then send out critical notifications to local police, faculty and students quickly.

If the Security Guard is armed the next step should be to carefully and quickly confront the shooter or shooters with a goal to neutralize at the first opportunity just like a responding officer. The question however is if the armed Security Guard has enough training for an active shooter situation to be able to approach and use their weapon without harming any bystanders in the process. It should never be assumed because they are a Security Guard with a gun that they have trained for this. Whether or not the armed Security Guard confronts the shooter should be discussed as part of the school plan for the active shooter response well ahead of time.

If the Security Guard in unarmed, they should not approach the shooter and need to try and evacuate along with other students. The unarmed Security Guard can serve a critical role in assisting armed police with locations on campus and even access if security badges are required to enter certain doors.

PREPARING IS THE BEST APPROACH

Active shooters are very unpredictable so it is difficult to prepare completely for it. A Security Guard should continue find ways to improve their training on the subject as methods can change following each time a shooting in a school occurs. Building trust with students and keeping open communication with the school staff can help create the team environment which is critical in any emergency. Security Guards are not alone in preparation for this.

A critical part of full preparation for any kind of crisis situation is covering yourself with Security Guard Insurance. Visit El Dorado Insurance today and receive your quote taking the first step towards protection for your future.