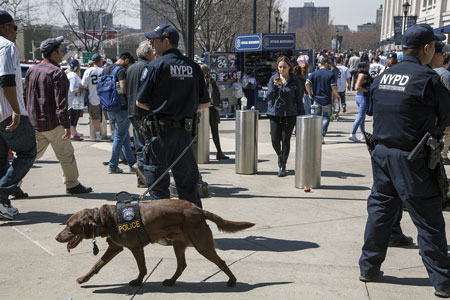 Security Guard Industry Prepares for Terrorism in the Stadium

Security Guard Industry Prepares for Terrorism in the Stadium

It’s game day at Carrier Dome, home of Syracuse Orange football among many other sports teams. Excited fans are everywhere gathering around the stadium. Approximately 100 Department of Public Security (DPS) Security Guards and police officers are patrolling the area. 75 surveillance cameras are recording waiting to catch any crimes or suspicious individuals and yet the DPS Associate Chief, John Sardino, is worried.

In our article, we will discuss the history of terrorist attacks in stadiums overseas and what the U.S stadiums and Security Guard Industry are doing to prepare.

September 11, 2001, was a horrific day in U.S history. It was also an eye-opener for Homeland Security and Americans that large terrorist attacks on U.S soil were no longer a question it’s a reality. The Security Companies were turned on their head and procedures everywhere changed across the board. The terrorist attack on that day was a critical breach in security with the worst possible outcome.

Terrorism is a tactic- a strategy used to a specific end. The violence is aimed at creating fear in the targeted population and often provokes prompt and violent response from the state. Terrorists target large populations of people to inflict as much fear as possible with hopes of vast media coverage. Because of this, it makes sense that heads of Security teams such as John Sardino worry about a Stadium environment being an attractive option for terrorists.

History of Terrorism at Stadiums

To date, there has not been any large-scale terror attack at any U.S stadium but it doesn’t mean there won’t be one. Terror attacks have been carried out in recent years at stadiums in other countries and it’s completely plausible to happen here in the United States.

On November 13, 2015, in Paris, there were shootings and bomb blasts which left 130 people dead and hundreds wounded when terrorists launched attacks outside of a major stadium, the Stade de France. Two men detonated suicide vests after Security Guards denied them entrance to the stadium when the explosives were discovered. In addition, there were also attacks at a restaurant, food stand, bar, and concert hall all in the same night.

In Istanbul on December 10, 2016, a pair of car bombs were detonated outside of Vodafone Arena during a soccer match killing over 38 people and injuring more than 155.

In both examples, the terrorist attacks occurred outside of the Stadium, however, a lapse in Security checks at the Manchester Arena on May 22, 2017, allowed a terrorist to detonate an improvised explosive device in the foyer killing 23 people including children and injuring 250 others during an Ariana Grande concert. This was a particularly devastating attack to the world because the targets were mostly teenagers and children.

Though terrorist attacks happen overseas far more than on U.S soil and stricter policies on travel are being discussed and enacted, terrorist groups don’t have to be inside the U.S in order to accomplish their goals. Certain terrorist groups have been able to influence homegrown terrorists in the U.S from the other side of the world through website propaganda and shared the ideology. Ordinary U.S citizens can be swayed to carry out terrorist attacks in the U.S such as the Boston Marathon bombing or the attack in San Bernardino, California.

Stadium security has increased significantly since September 11, 2001, however, the attack in Manchester is the most recent reminder that it can fall short even in larger venues filled with people. The National Football League is now only allowing certain small clear bags or clutch purses into the stadiums and banning all other types in all the NFL games. Major League Baseball has also followed suit with beefing up security by installing metal detectors at every ballpark. For many stadium events, each violent act carried out in a stadium or somewhere else in the world prompts the list of prohibited items allowed into the venue to grow.

Back in Carrier Dome, John Sardino’s team is preparing for the game using detection dogs to sweep all corners and alleyways and having the fire department perform their own assessment of public safety. Metal wands are used on anyone and everyone as they enter the stadium. John does not cut corners when it comes to security.

A Terrorist Future Is Here

Technology is becoming more advanced these days such as the use of drones which have become useful to the security Industry however it has also become crucial to terrorists. Drones are being used more frequently by terrorist groups to not only capture video surveillance of military troops but also to carry and drop weapons such as grenades on targets. Terrorists are also releasing videos showing how an off the shelf drone can be armed or used in a violent way. There is a concern that drones will be used to carry out terrorist attacks in the U.S which is why companies are developing ways to control or take down drones in the sky. Stadiums are among interested customers for this anti-drone technology however due current FAA regulations it is illegal to take out a drone in the air.

Terrorism in a U.S stadium or arena is a real threat. In order to thwart attacks, security teams must always have procedures in place and follow those procedures without skipping steps. As technology keeps advancing and terrorists become more creative, it’s important for the Security Industry to review tactics regularly and plans to ensure they evolve to counter potential terrorist threats.

It’s impossible to predict and prevent violent events in a stadium 100 percent of the time, however, being proactive with preparation, investing in security, thinking ahead and evolving can help keep people safe during the stadium events and help people like John Sardino sleep a little more soundly at night.

The Security Industry is continuously changing. As a Security Guard, it’s best to keep up with the changes and stay protected throughout. Call us today at El Dorado Insurance for your no-hassle quote on Security Company Insurance.