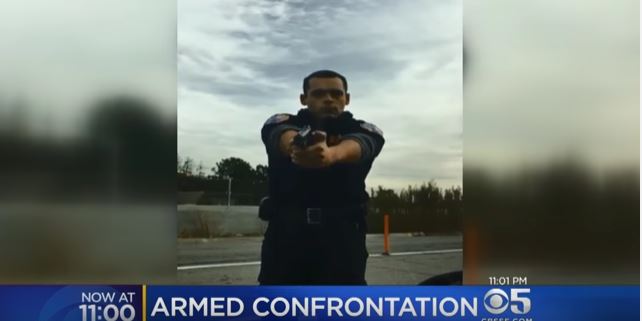 Saturday, December 15, 2015, is a day that will stay in Apple engineer Nicholas Buchanan’s memory for a long time to come.

After shopping at the mall, Mr. Buchanan got into his car and prepared to exit the Westfield Valley Fair Mall’s parking garage. As he waited in line, the driver in front of him began to back up. Mr. Buchanan edged his car over into the adjacent lane to give that driver extra room to maneuver. As he did, he inadvertently rolled over an orange traffic cone.

Whoops! But, as Buchanan’s September 2, 2016, lawsuit states, not enough of a whoops to justify what happened next.

Moments after his car flattened the traffic cone, Mr. Buchanan found himself staring down the barrel of a .45 wielded by Mr. Francis Lancaster-Abraham Fielding, a Mall Security Guard. Fielding remained locked and loaded for several minutes until his equally belligerent supervisor, Robert Genereux, arrived on the scene.

Mr. Genereux demanded Mr. Buchanan put his car in park, unlock his door and step out of the vehicle. Mr. Buchanan declined to do so, stating that they could talk equally well via his rolled-down window.

Video footage captured on the mall’s security cameras and Mr. Buchanan’s cell phone each show the same scene – an aggressive Security Guard wordlessly pointing a .45 at Mr. Buchanan, followed by the Guard’s supervisor threatening Mr. Buchanan in an attempt to get him to step outside his car.

The lawsuit is suing the mall, the Security Company and the two Security Guards for unspecified damages. The charges cited are as follows: assault, false imprisonment, negligence and emotional distress.

In a statement to Bay Area’s The Mercury News, Mr. Buchanan’s attorney, Richard Alexander, stated that the Security Guard was “totally out of control.”

The employer of the two Guards, Security Risk Management Inc. (SMRI), was unavailable to comment on the matter.

The Mercury News reported that the altercation concluded with an apology from Mr. Genereux to Mr. Buchanan on behalf of Mr. Fielding.

In a more recent update on the case, details from the lawsuit state that, after viewing Mr. Buchanan’s vehicle lane change, Mr. Fielding perhaps assumed that Mr. Buchanan was going to try to run him over, thus prompting him to draw his weapon and cock the trigger.

Unfortunately, investigations revealed that Mr. Fielding did not have a permit to carry the .45. He was also working as a Security Guard for SMRI under an expired Security Guard license. His employment was terminated by SRMI shortly after this incident.

Santa Clara County’s District Attorney stated the county would not be pursuing charges against Mr. Fielding for “unlawfully brandishing a firearm,” despite encouragement from police who responded on the scene to do so.