New Ruling Forbids the Use of Private Process Servers

Being a Process Server was never an easy job. In Tennessee, it just got harder.

A new ruling forbids the use of private Process Servers. This new law is in response to court filings regarding a string of harassments including reports of an unknown individual attempting to serve papers late at night. 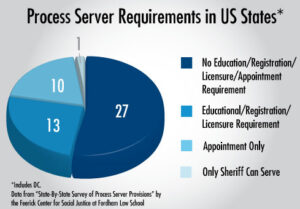 The proposed new legislation would require a process server to go through a legal procedure to operate in the state of Tennessee. Currently, the only requirement for a private process server is to be over the age of 18 and not be a party to the case. So while the legislature works on drafting the procedures, the sheriff’s department will be handling all process server notifications. There is no licensing requirement in place in Tennessee, but with this proposed legislation that can very well change.

Whether or not Process Servers feel they need more regulation, the job is not without dangers.

In March of 2017, an armed Florida man chased a Process Server off of his property at gunpoint. He was later acquitted based on Florida’s Stand Your Ground Law.

In 2008, a Process Server was killed in Denver while serving divorce papers. When deputies arrived, the offender was attempting to choke the Process Server’s two children. 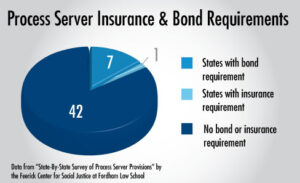 In yet another more amusing case, rapper Tyga is being sued by the person serving him after being assaulted while… you guessed it…. informing him that he’s being sued. Tyga, who gained some notoriety as Kylie Jenner’s boyfriend, directed his entourage to grab and choke the Process Server.