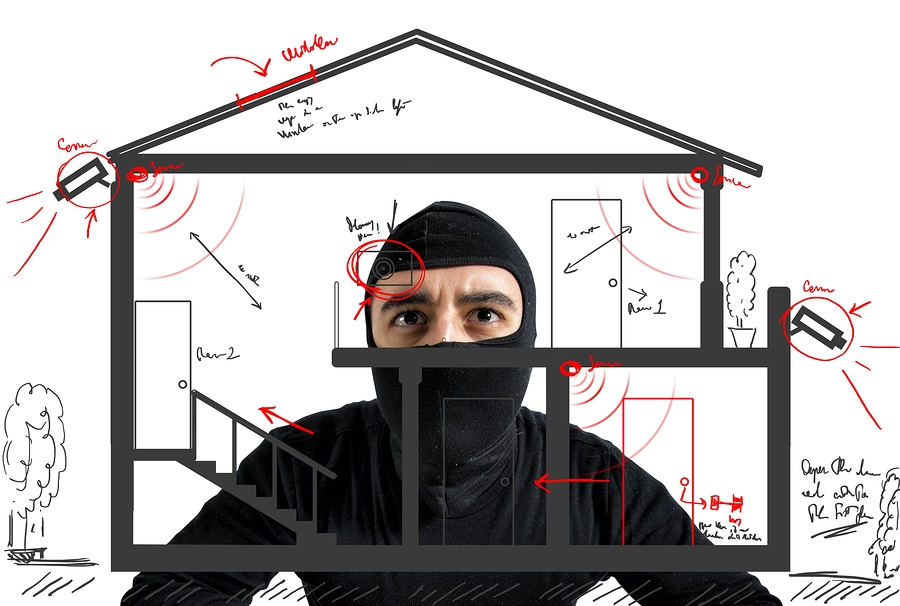 The most recent Federal Bureau of Investigation (FBI) burglary statistics highlight an alarming new trend. While the overall volume of property crimes has slightly decreased over the past year, the number of violent crimes is on the rise. What this means is that when a burglary attempts forced entry to a home or business, it isn’t just “stuff” the robber is after. Before the burglary ends, rape, aggravated assault, manslaughter and even outright cold-blooded murder may occur.

It goes without saying that this shift makes the job of a professional private investigator, security firm and alarm installation and monitoring service just that much more challenging – and critical. It is no longer sufficient to entrust either possessions or persons to even the most sophisticated electronic watch dogs. What is needed is to out-think the burglars by learning how they do what they do. In this post, learn about 5 modern burglar techniques to watch.

Technique 1: Deception is still a prime way to gain entry, information and loot.

Burglars often get their great ideas the same place everyone else gets them – from watching television and movies. As such, deception is still one of the prime ways to gain entry to a home or business.

Perhaps this is because there are just so many ways to deceive. Whether the burglar poses as a delivery person, a repair professional, a door-to-door salesman isn’t the issue. The issue is taking care to limit access to any unknown person and ensure the premises are completely secure (including windows, doors and gates) after they depart.

Technique 2: Working in pairs is a type of “burglary insurance.”

While there are the criminals that conduct their affairs in a casual, lazy or disorganized fashion, these typically aren’t the cases that make national headlines – or claim lives.

In many cases, the burglar takes their job every bit as seriously as their victims. Whether the ultimate goal is primarily valuables or assault or worse, having a trusted partner can greatly increase the odds of success.

The news media has taken to calling these “professional” burglaries, but the truth is that burglary has always been a time-honored profession in some circles, just as slinging burgers or preparing taxes is in other circles.

The difference the news media refers to is one of preparation, and this is where the value of working in teams really shows. It can take hours, days and weeks to do surveillance on targeted persons or properties, plus a coordinated team working together to tackle both physical and technological barriers.

In this context, the word “soft” refers to “easy,” as in an “easy target.” The home or business that is poorly lit, not well maintained, equipped with only basic locks on windows and doors….this is a burglar’s dream come true, if the contents inside is worth the risk of entry.

But the reverse can also constitute a soft target. Here, the home or business may be pristine, updated, with immaculate landscaping and bright security lights. But if the occupants are observed to be casual about security, leaving doors or windows unlocked, permitting strangers access without verification, leaving valuables visible through windows or regularly not arming their security system, it doesn’t take much to think like a burglar and realize this is a plum target.

The bottom line is that a burglar, just like any other dedicated worker, continues to look for the lowest risk in exchange for the biggest payout.

Technique 4: Burglars target one area at a time.

The news media is fond of using the phrase “a rash of burglaries” when reporting on what appear to be “serial burglaries.”

But the phrase is accurate, as often burglars will be very deliberate about targeting one area at a time, finding communities containing homes or businesses in close proximity to one another that practice lax security, have natural visibility screens (alleyways, high vegetation, no dog, et al) and contain valuables to hit.

Today’s burglars are experts at what they do, because like any expert they develop a routine that works and they use it again and again.

For this reason, the average burglar can be in and out of a targeted home or workplace in a handful of minutes, moving in a predictable pattern to look for high-value items in the places where they are most likely to be found.
What each of these five modern burglar techniques emphasizes is simply this: while the gadgets and gizmos developed to catch burglars in the act have changed, the art of the burgle remains strikingly simple from decade to decade: keep doing what works, again and again and again.