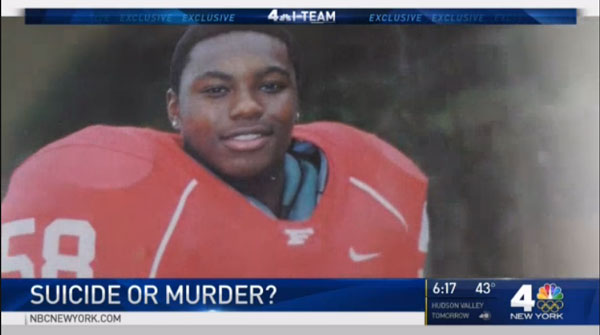 The victim, Johmeik Simmons, was found dead in a Freeport, Long Island home last November 2016. The cause of the young man’s death was ruled a suicide by a medical examiner, gunshot wound to the head, and the case was closed.

But it was a series of red flags, lack of investigation work and strange events that have Simmon’s mother and two Private Investigators still looking for answers. Was it suicide or murder?

Who Was Johmeik Simmons and What Happened?

So who was Johmeik Simmons and what happened on that tragic day?

Simmons was only 20 years old when he was found dead at a friends house. In high school he was a football star playing tackle and defensive tackle positions for the Freeport High School Boys Varsity Football team.

After graduating high school, Simmons attended Nassau Community College and had just re-registered for another semester. He had also faced a personal battle with cancer. Simmons had been diagnosed with Hodgkin’s Disease and prior to his death he was declared cancer free.

According to Climer, on the day of her son’s death, he was on his way to see his grandmother but for an unknown reason went to a friend’s house. Nassau County Homicide detectives had told Climer that they spoke with the boys at the house and they had stated Simmons had killed himself. The witnesses said Simmons told them he had an argument with his dad earlier, then pulled out a gun and shot himself in the head.

Nassau County Homicide detectives had spent months on the case and then it was closed in July 2017. Medical examiners concluded the death was by suicide.

Dowd has over 20 years as a Veteran NYPD Second Grade Homicide Detective. Dowd has helped numerous people in the past find the truth including exoneration of a prisoner who spent a decade in prison for a crime he didn’t commit. He had also once convinced the New York Police Department to re-investigate a murder of a U.S marine’s wife which happened prior to the marine’s deployment to Afghanistan.

The second investigator, Yael Rom, specializes in trial preparation, case management and legal research. Rom once served in the Israeli Defense Force as a military police sergeant for 3 years and was also a Senior Air Force Procurement Specialist for the Government of Israel, Ministry of Defense. She is an expert in criminal investigation, interviewing clients, suspects and witnesses and evaluating witness statements.

Days following the shooting someone had put Simmons cell phone and keys in his father’s mailbox. The cell phone had all messages and phone logs cleared from that day.

In February 2017, Climer received an anonymous text message stating that her son had been murdered. She sent the message to detectives but did not receive a response.

With so many unanswered questions it is now up to the Private Investigators to find the truth and what had actually happened to Simmons. Dowd and Rom visited the Long Island neighborhood and talked with neighbors who said they had never been questioned by detectives following the shooting. The home where Simmons had died was vacant due to an eviction of the tenants. However, the landlord wasn’t even aware a shooting had occurred in the house.

The Private Investigators also poured through the official case files obtained through the Freedom of Information Act. There were no witness statements from the two boys who spoke to detectives or even a crime scene report included in the files.

Forensic testing was performed but it was not sent to the lab till months later and the medical examiner concluded Simmon’s death was a suicide prior to any of the testing results. DNA was found on the gun itself from 5 different people including Simmons with the other 4 unknown. The two boys who were witnesses were swabbed for gun residue and some of their samples showed positive but were ruled inconclusive.

It was also concluded the gun was fired from several inches away.

Was it Suicide or Murder?

At this time Dowd and Rom are still gathering facts. The Nassau County District Attorney stated that there was not enough evidence to charge anyone for Simmon’s death. The Nassau County Police department maintains the homicide detectives performed a thorough investigation. However, the case can be reopened if there is new information that warrants investigation.

Dowd and Rom have hired an independent crime scene expert to review the case and go through the official files and provide findings.

Like all good Private Investigators, Dowd and Rom are working hard to uncover the truth and find justice for Johmeik Simmons. But overall they want to help a grieving mother finally find closure.

Beware the Road Ahead

As a Private Investigator, each case that comes across your desk can present different challenges. A strange case such as this one could potentially turn into dangerous work at any moment. Protect yourself by purchasing Private Investigator Liability Insurance today. Visit our Application Center for your quote.