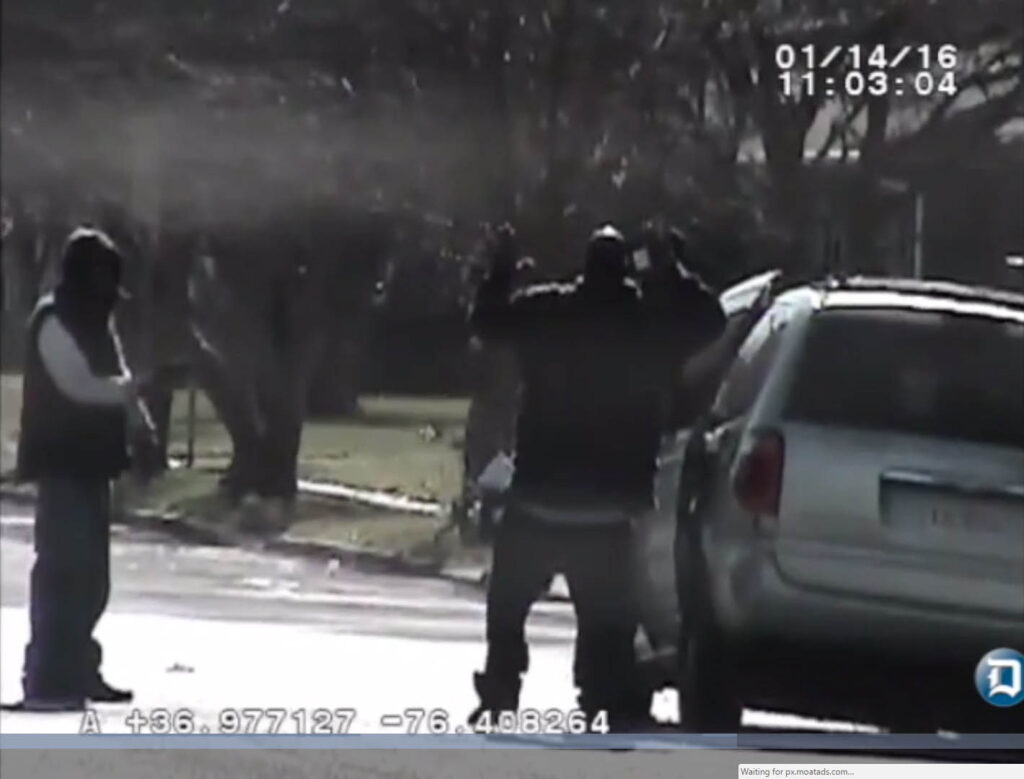 Laratio Lorenzo Dantzler has been described as “evil” and a “cold-blooded killer.” The jury who convicted him spent less than one hour in deliberations before returning to mete out the maximum possible sentence for a double homicide crime.

But justice might not have been possible in this case were it not for the timely presence of a Private Investigator, Jason Gilliam, who just happened to be conducting surveillance nearby for an entirely separate case.

Gilliam’s first clue that something might be amiss on the street where he was parked was the sound of a percussive CRASH. The sound came from the impact of a minivan plowing into the side of a parked pickup truck. Immediately, Gilliam activated his Private Investigator equipment including the PI-grade video cam to capture footage of what happened next.

A Double Murder in Broad Daylight

What happened next was nothing short of horrifying, although the full story would not be pieced together until hours later. Dantzler and another man jumped out of the minivan and began to argue with the other men who were still inside. Dantzler’s companion was observed to walk away from the scene and, moments later, shots rang out.

Even while PI Gilliam continued filming the unfolding carnage, a local resident was on the phone with 911 describing what she was seeing – and hearing. At the moment she heard gunshots, the call dissolved into the sounds of loud sobbing as the caller feared for the lives of those inside the van.

Thanks to real-time information provided by the local 911 caller, it didn’t take police long to track down Dantzler, disarm him and arrest him. One of the arresting officers, Master Police Officer Jamie Acree, had also recorded footage from her body cam device. Gilliam provided police with a copy of his surveillance footage for use in prosecuting Dantzler.

The double homicide took place on January 14, 2016. A little over a year later, on March 3, 2017, Dantzler was tried in the Newport News Circuit Court and found guilty of double murder.

After watching the two pieces of compelling video footage provided by Gilliam and Acee and listening to a recording of the 911 call, all 12 members of the jury showed no hesitation in sentencing Dantzler to two full life sentences plus an extra 65 years topped off by a $300,000 fine (the maximum fine permitted).

The victims’ loved ones expressed their satisfaction with the trial outcome, especially given the brutal nature of the homicides. One victim was shot in the head three times while another victim was shot 10 times. Both victims had young children at home.

At the time of his arrest, just minutes after the double murders occurred, Dantzler was found to have not one but two guns in his possession.

A PI Just Doing His Job

When Jason Gilliam woke up that morning, of course he had no idea he would witness and capture on film a double homicide later that same day. Arresting officers and prosecutors state that Gilliam’s footage was instrumental in implicating Dantzler and ensuring the charges would hold up in court.

This simply proves once again what any experienced Private Investigator would corroborate: that no two days on the job will ever be alike and that it is a job requirement to always be prepared for anything. If Gilliam had not been so attentive while conducting surveillance on a completely unrelated matter, and if he had not immediately thought to turn on his video surveillance camera, the prosecuting attorneys might have found themselves lacking critical evidence to convict Dantzler of his horrific crimes when the case finally went to trial.

As it turned out, Dantzler was also wanted in connection to three other armed robberies and several additional gun-related crimes. Gilliam’s foresight to invest in professional-grade surveillance equipment and learn to use it where it was critically needed that day took a confirmed criminal off the streets for good.

Experienced professional investigators know it is unwise to ever settle for less than the very best in surveillance equipment, client intake intel, tactical education, weapons training and Private Investigator Insurance.

Always Be Prepared For Your Next Surveillance